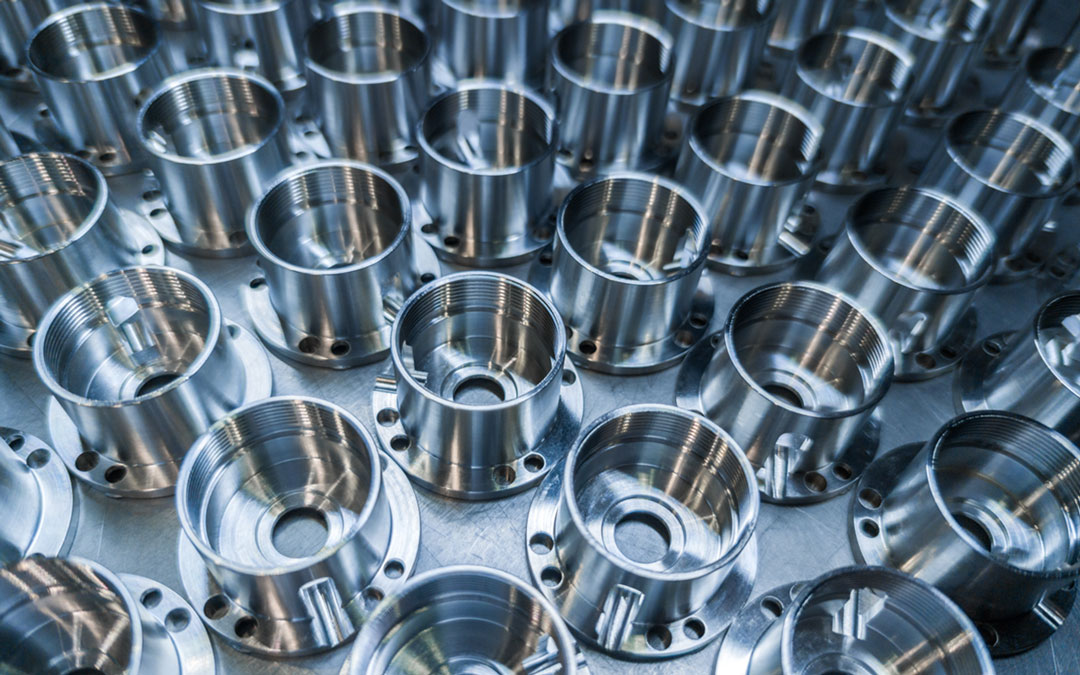 Non-destructive material testing has become firmly established in process monitoring in recent years. Due to its efficient performance, this inspection procedure has become crucial for comprehensive process control. At the same time, in many industries it is no longer sufficient to test only the geometric dimension of a component. This is attributed to the fact that a higher demand is being increasingly placed on testing the components in parallel with continuous operation. Far more extensive tests are therefore essential to prove the corresponding properties over the service life. 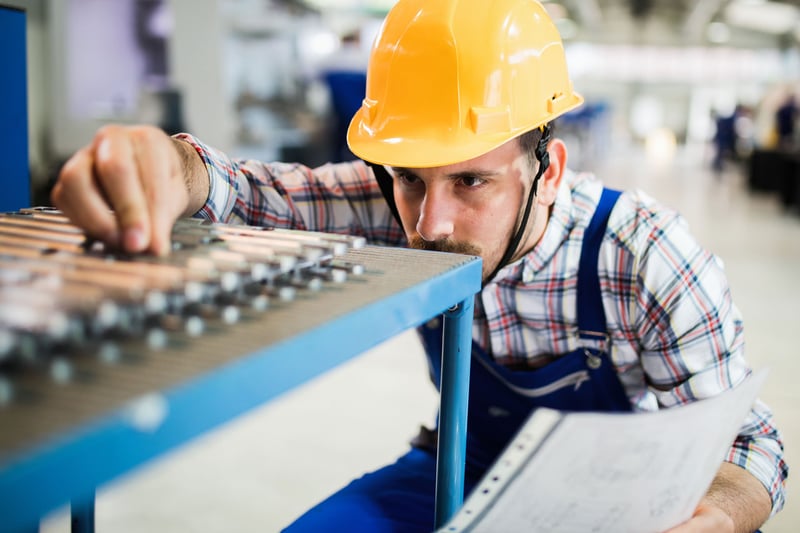 Why is non-destructive material testing necessary?

There are many safety-critical applications or major economic consequential damages where components fail or do not meet their requirements. If, for example, a roller coaster breaks apart while operating, human lives are immediately endangered. If the pipelines of a building fail, considerable water damage can follow with subsequent high renovation costs.

Accordingly, standards in the automotive sector and many other industries are defined. These ensure a continuous and in-depth inspection of safety-relevant components during the manufacturing process and before installation.

What sort of defects can be found in components?

The defects catalog from customers is diverse. For instance, decisive influencing factors are the application area of the component, the material that is made of, and its dimensions. The most common types of defects to be found in a surface inspection are:

Classical component defects are cracks spotted in the material surface. Eddy current testing is usually used here. This is because even the smallest cracks, which initially do not pose a problem, can become enlarged and widen under permanent load. In the worst scenario, this can lead to component failure. Think of a crack in a brake disc: there is a chance that after a certain period of operation the brake disc severely tears while decelerating. In road traffic, such a defective component can quickly lead to life-threatening situations. 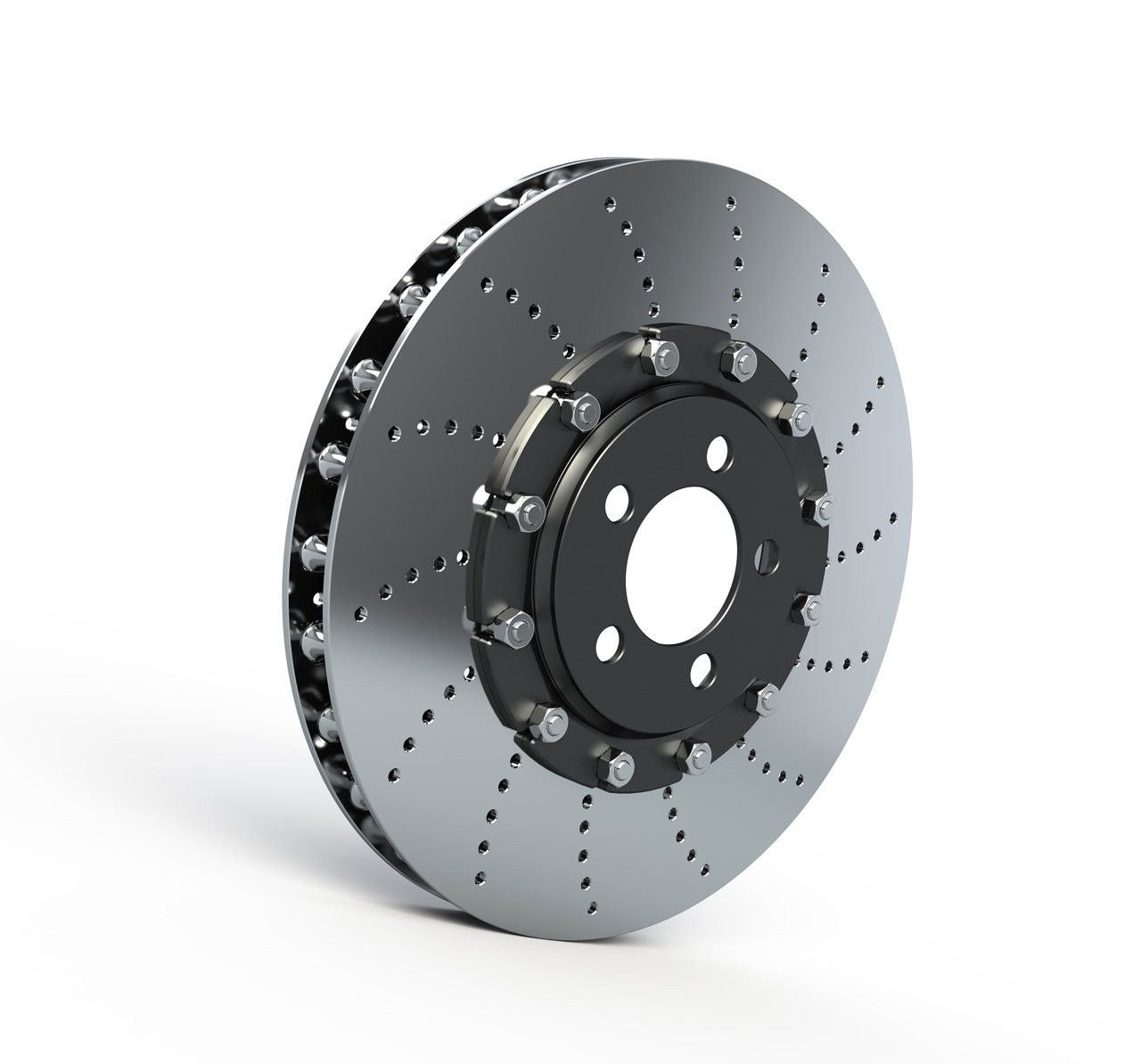 For this reason, customers expect that even the smallest defects with a depth of only a few micrometers will be found and reliably displayed during the inspection process. The STATOGRAPH testing instrument from FOERSTER, for example, is usually employed to verify this. The defect size which can still be resolved with the STATOGRAPH depends on the component and its material as well as on the test frequency and the probe used. With the optimum design even cracks with a depth of only 30 µm can be found.

Which methods are available for the detection of cracks in cast components?

There are several methods for component testing. A distinction is made between two classical approaches:

Components from batches that are later resold and installed can only be tested in a random and destructive manner. As the need for testing increases, the cost of the scrap caused by the test rises. As a result, a complete test is methodologically impossible.

On this note, the field of non-destructive testing has been developed. Based upon this, different methods are available depending on the testing task:

Different test methods are used depending on the application. Essential influencing factors are the test material, the size, the defect pattern, and the test task, as well as the required cycle time and the available budget. 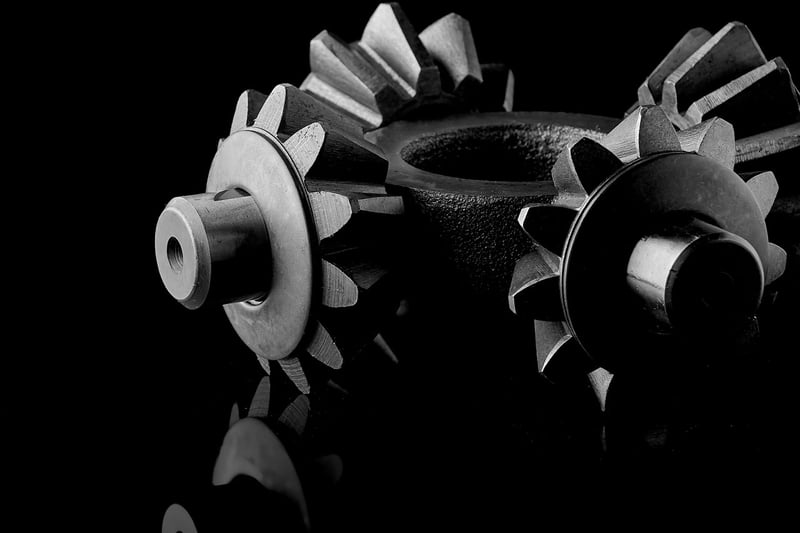 During visual inspection procedures, surface-related quality features such as shape deviations, defects, or the surface condition of a component are viewed and evaluated with the naked eye or using optical gadgets(e.g. magnifying glasses, microscopes, or endoscopes). Prior to all other destructive and non-destructive testing methods, visual inspection is initially carried out in a comprehensive test and is used for various product shapes according to specified test instructions. 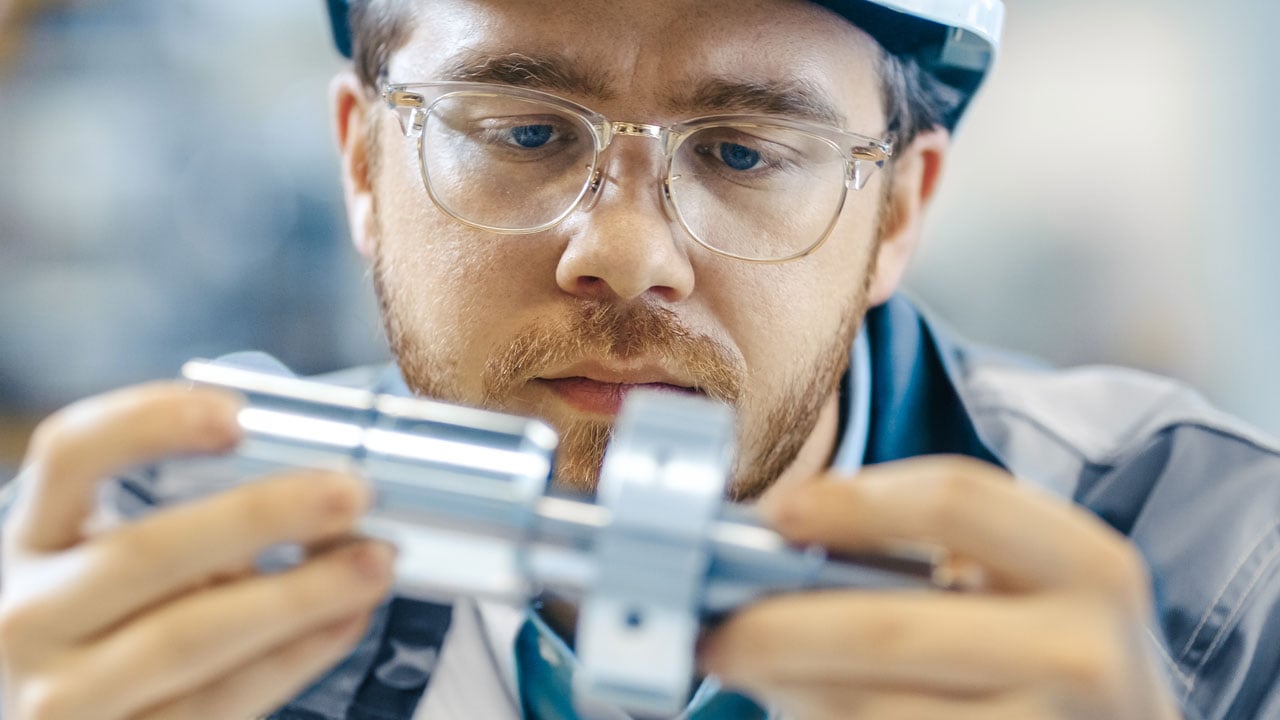 The test procedure is implemented as direct and indirect visual inspection within the scope of production monitoring, inspection, and damage investigation of components, systems, or other test objects. The test results are strongly dependent on the experience and subjective evaluation of the tester. Therefore, comparability is hard to achieve.

The dye penetration test is another non-destructive test method for material surfaces. The basis of this process is the capillary action. The penetration process is used as visual evidence of surface defects such as cracks or pores. 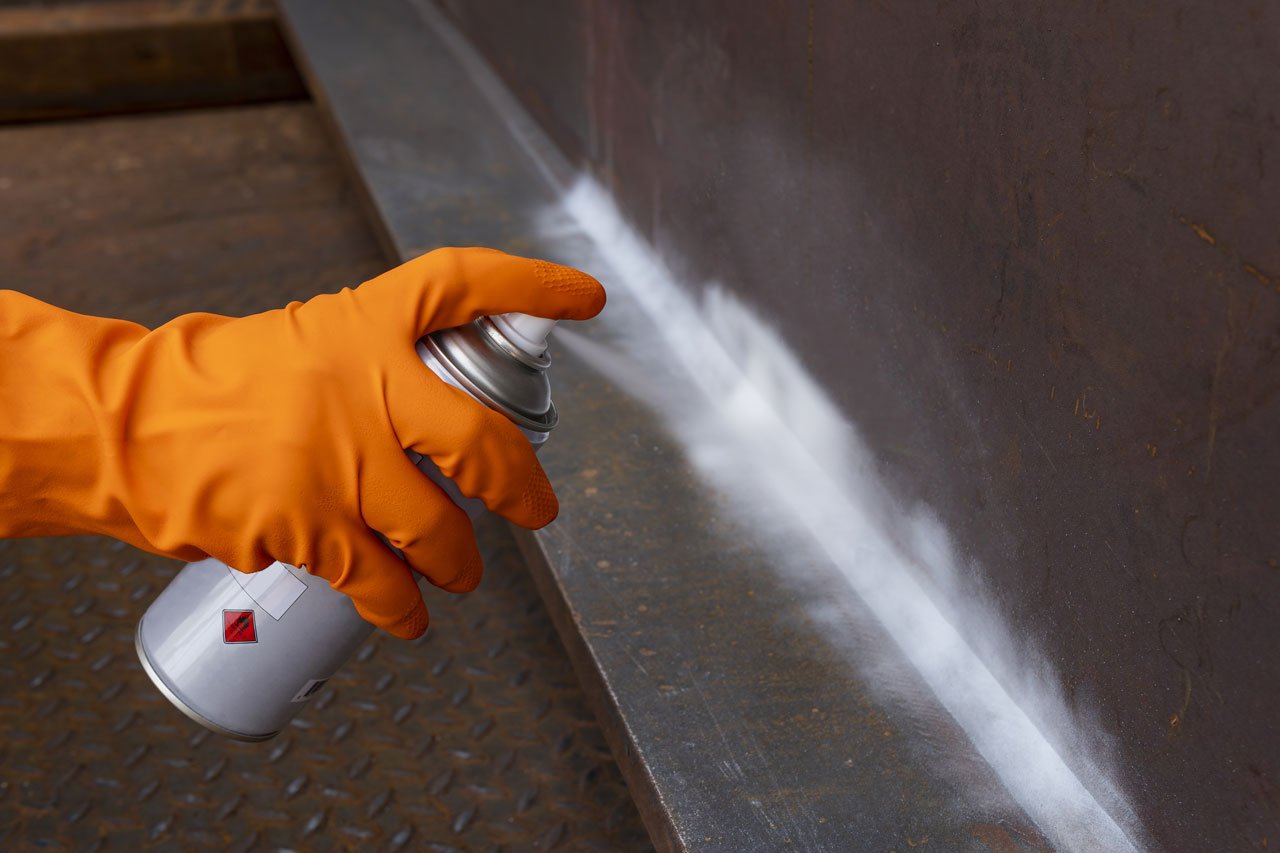 The process is mainly used for metals. If suitable, the dye penetration test can also show defects in plastics and ceramics. As with the visual inspection, the color penetration inspection is a subjective method that depends on the experience of the inspector.

For the surface inspection of conductive workpieces, the eddy current method (English: "eddy current testing", short ECT) has established itself as the dominant technology. Eddy current test systems consist of a test instrument with a corresponding probe and, if necessary, additional software modules. The test probe contains a field coil (primary coil) and a differential coil (secondary coil). The test probe is connected to the test instrument, for example, a STATOGRAPH CM for crack testing. 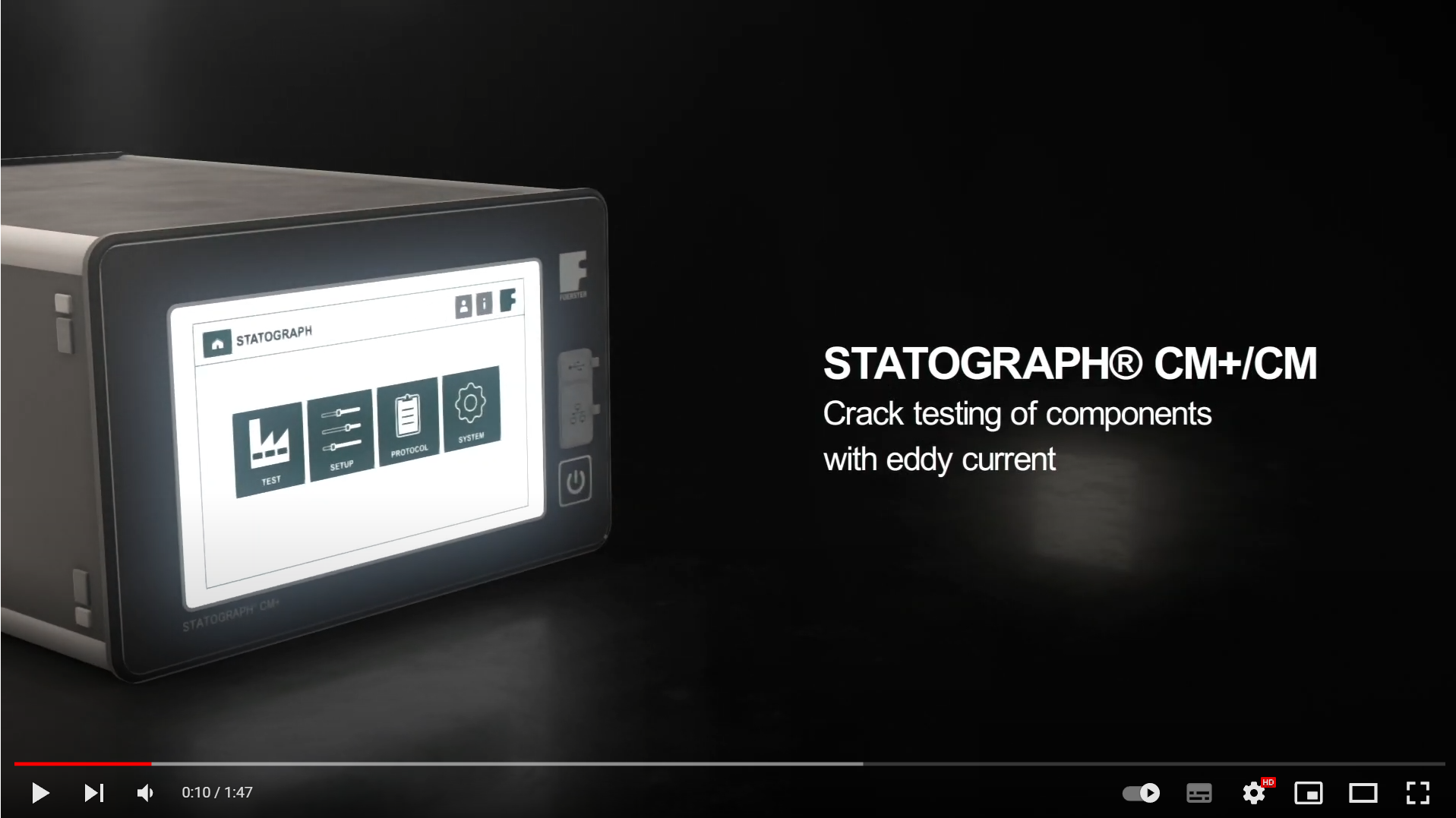 The field coil is operated with an alternating field and induces a secondary field in the differential coil, which changes the signal amplitude and phase when surface changes occur. This signal variation is recorded by the test instrument with a very high data rate. This information is later reported to the production plant. As a result, a bad part can be recognized and sorted out.

Depending on the fault pattern and material of the test object, the correct configuration for the test instrument and the test probe must be selected. There are various ways to adjust the parameters for the test so that they react as optimally as possible to specific error patterns. At the same time, this favors that irrelevant errors can be found more poorly. Downstream software programs can also assist in evaluating the test data. The same data is evaluated with different filter methods and thus optimized for multiple error patterns. 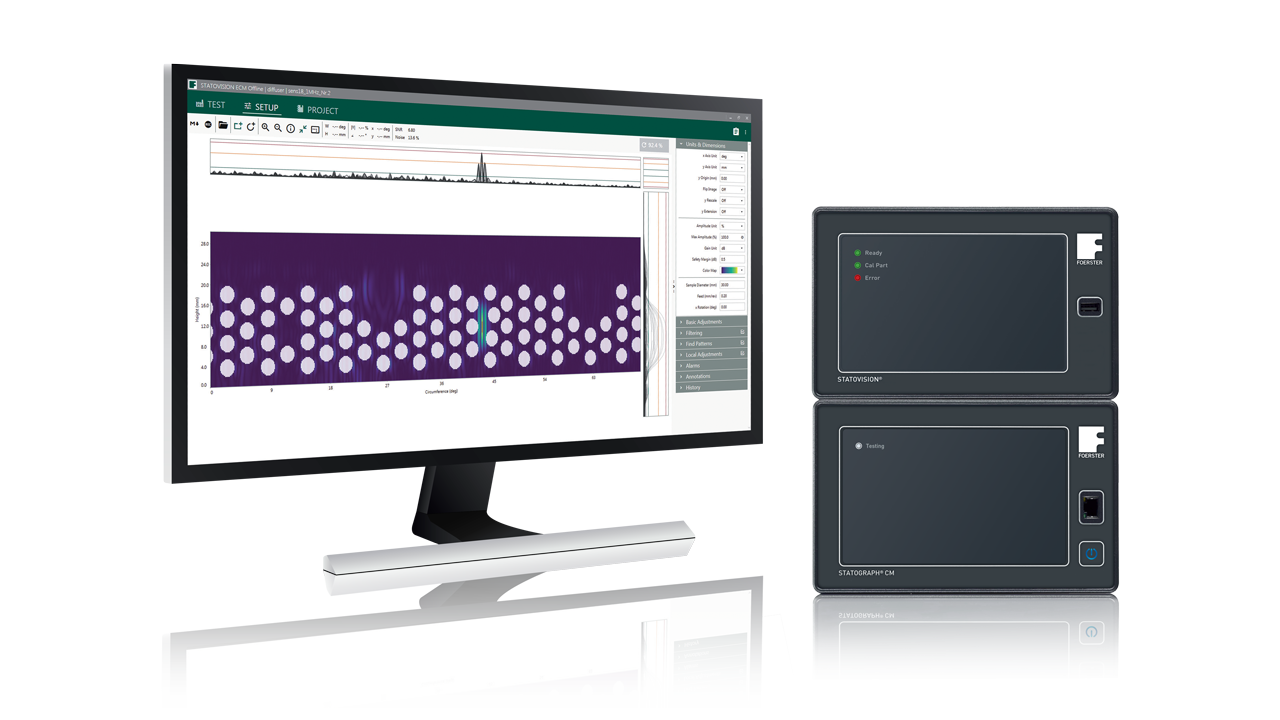 STATOVISION is an example of such downstream software capable of improving signal quality. Following the raw data acquisition, the software uses digital filter methods. This is especially necessary if the requirements for the size of the error to be found are very high. Typical error depths that are expected to be detected with the eddy current method range from 30 μm to 1 mm.

The prerequisites for eddy current testing for surface defects are, on the one hand, generally conductive components, on the other, rotational symmetry of the test objects. The rotational symmetry is necessary to perform the test as efficiently as possible. The component is rotated for testing and the probe scans its surface in parallel. If there is no symmetry, another test method may have to be used.

Eddy current testing is always an advantageous method when it comes to conductive and rotationally symmetrical materials. In addition, these components must have surfaces that are as smooth as possible in order to be scanned with a probe. If these conditions are not met, complementary test methods are used. Crack detection by means of thermography is steadily increasing in industrial applications. Thermographic crack testing is usually carried out by employing the pulse thermographic method or the Lock-In thermographic method. Here, the component is heated locally in short pulses with an energy source (for example, by induction, optically via lamps or laser). The surface is recorded with a thermographic camera. Cracks and other local differences on the surface react differently to the heat applied. A crack stores less heat and stands out clearly from its surroundings in the thermographic image. 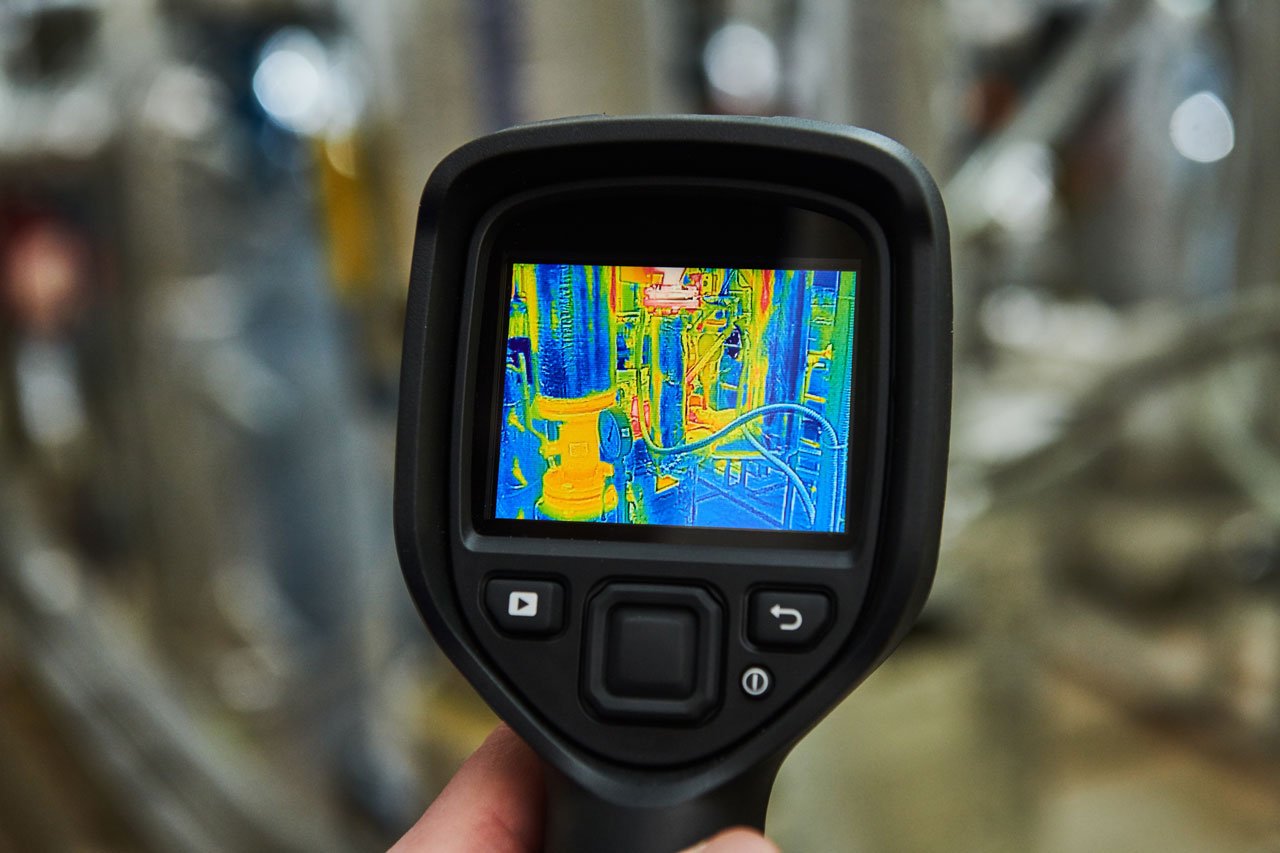 The different heat sources also show different effects. If, for example, a conductive component is excited with an inductor, more heat is generated at the tips of a crack than at other points on the test part. The eddy currents have condensed here and the heat input is higher. The images recorded with the thermographic camera flow as input into a data processing software. Special processing algorithms are used for image evaluation. Several images taken in succession show, among other things, the heat flow over time and provide further information. The main advantage of the thermographic method for crack detection is that the components can have a high degree of freedom in their size and geometry. In addition, the technique can be applied to non-conductive components. In these cases, an optical method is usually necessary for energy input.

Furthermore, the method is relatively stable against environmental influences. However, the tested surface should be free of contamination whenever possible. Changed surface properties can lead to different heat flows, which may appear as pseudo faults in the evaluation. Automated processes with component handling can be achieved relatively easily today. Good thermographic cameras are also now available, thus, this process is slowly establishing itself in production lines. The technology has the potential to replace magnetic particle inspection, which is still very dominant today.

Probably the oldest method for finding cracks in materials is magnetic particle testing. According to this method, ferromagnetic components are magnetized and sprayed with magnetic powder. Defects in the test part react differently to the magnetization. At this point, the magnetic field appears more strongly on the surface. Accordingly, the magnetic powder can adhere better. By adding fluorescent material to the magnetic powder, the imperfections "shine" differently under certain lighting conditions. The major disadvantage of this procedure is that the good or bad sorting of the test part takes place on the basis of the subjective assessment of the test engineer. The experience of the inspector alone determines whether a crack is assessed as large or small, or whether the extent of an error is of a magnitude that can be assessed as bad. In addition, cleaning the components after the test requires great effort, since the magnetic powder sticks to the test parts. Automating the systems for magnetic particle testing can be quite complex. The test procedure is therefore only useful if the number of test items is not too large.

Eddy current testing is the preferred method for surface-open cracks in conductive components. However, the method reaches its limits in the case of cracks or material anomalies that are located inside a test specimen. This is because the penetration depth of this method depends on the frequency used. If this is in the kHz range, the penetration depth is reduced relatively quickly to only a few millimeters. Therefore, another established test method is crack testing with ultrasonic devices. The ultrasonic method is suitable for testing components down to their depth. With this method, any kind of material can be completely "X-rayed". For this purpose, a measuring head with an ultrasonic transmitter and receiver is placed on the test part. The ultrasound generated in the measuring head is transported into the test part through a coupling medium, usually a type of water. Good coupling is important for effective testing. 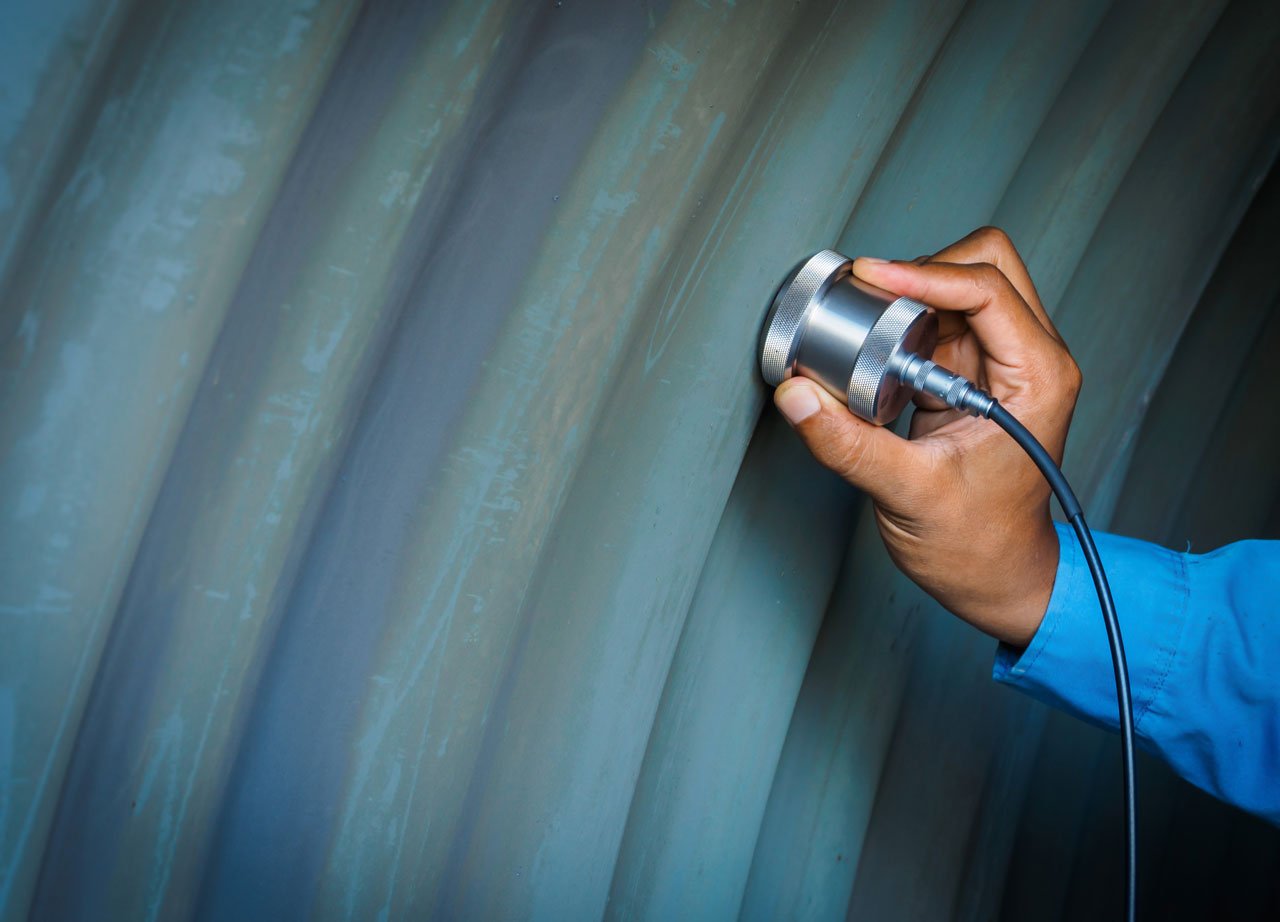 The ultrasound penetrates the test piece and echoes of the ultrasonic waves are created by reflections on the back wall. Defects, such as cracks or inclusions, lead to additional reflection of the ultrasound. These are recorded in the search unit. The type and size of the reflections allow conclusions to be drawn as to where the anomaly found is located in the specimen. The production of ultrasonic search units is very complex. In addition, closed systems are required due to the coupling medium. Furthermore, the coupling medium must be as free as possible from impurities and bubble formation, as these disturb the ultrasonic sound path and act as a material defect.

Which crack - which process? 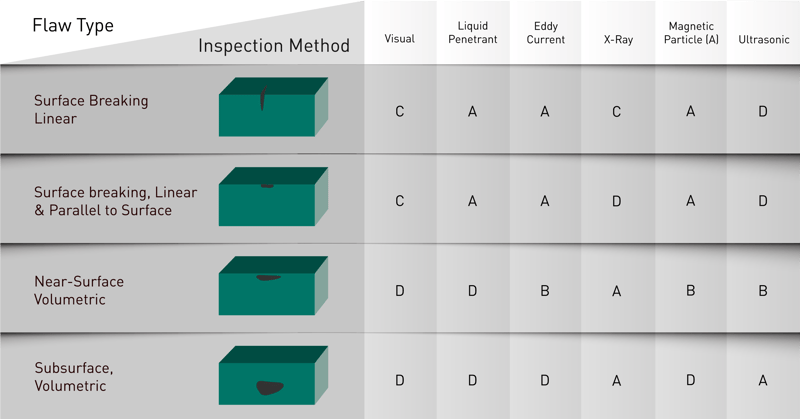 D = Not at all suitable

All the non-destructive methods for crack testing shown here are justified. The appropriate test method is defined based on the type of error and the material used. It is also possible to use a combination of different test methods, which may be integrated together in one test line. 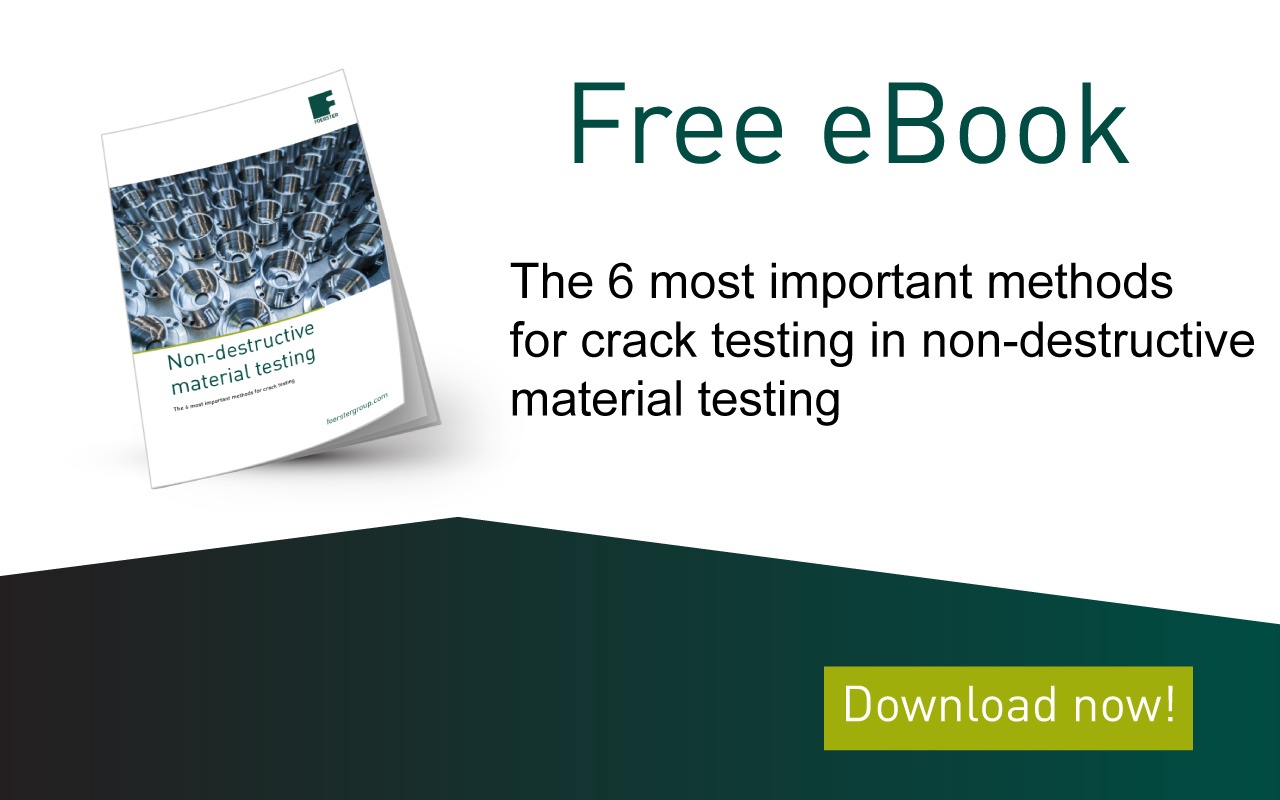 Crack testing
Previous Story
← Why is demagnetization becoming an ever-increasing necessary process?
Next Story
What are the most significant properties assessed during materials testing? →

These Stories on Crack Testing

Crack testing: How does an eddy current test instrument work?